Moles and voles are two garden pests that wreak havoc on your landscape. Tearing up lawns, gnawing through the roots of new and established plants, eating the bark on trees, upending newly planted bulbs—these are two pests that can destroy a garden faster than you can plant one. Don’t dismay. There are ways to get them out of your garden and on their way—or even, gasp!—learn to live with them.

For more information on the responsible management of wildlife in interaction with our gardens, read this from The Wildlife Society. 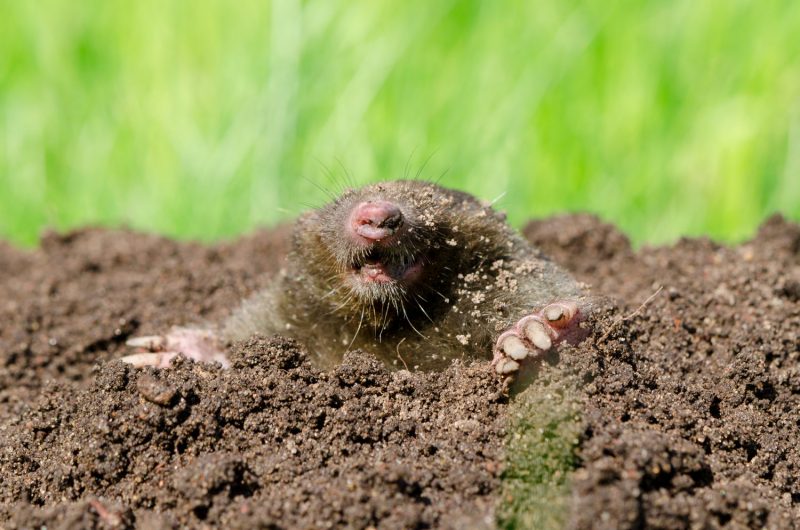 Moles are insectivores whose diet consists of earthworms, grubs, insects, and larvae. They measure 4”-8” long, have paddle-like feet with extended claws for easier digging, and can be grey, brown or black. They have elongated heads and snouts but short necks. They have tiny eyes and no external ears. They are almost blind except for the ability to see the light and dark. They breed once a year in late winter or early spring. Litters are typically four to six babies that leave the nest after four weeks. The life span of a mole is six years. They are solitary creatures except when breeding annually.

Moles live in dens underground—under trees, sidewalks, and buildings—with a network of tunnels connected. A mole can dig up to 15 feet an hour, and tunnels aren’t used repeatedly, sometimes only once. The surface tunnel ridges are for hunting. The molehills are created by excavated dirt as they build their burrows. Moles hunt both day and night. Moles are always underground, so the evidence they exist is the tunnels and hills.

Moles aren’t all bad. There are a few reasons not to get super stressed over them. Read on.

Moles are extremely beneficial because they consume the larvae and adults of numerous pest insects, such as Japanese beetles, that affect garden, landscape, and flowering plants. Additionally, their tunneling activity loosens the soil, improves aeration, and mixes deeper soils with surface organic material, all of which enhance soil quality. However, moles can be a nuisance where their tunneling disturbs lawns and recreational facilities. Although moles frequently are blamed for feeding damage on the roots of vegetation or seeds planted in gardens, they rarely cause such damage. Garden plants may be uprooted or heaved out of the soil inadvertently as these animals burrow.

In other words, moles do eat their fair share of Japanese beetles (and more hateful pests), so for the rose lovers, they may not be the worst thing to happen to a garden, but for lawn lovers, they are a nightmare.

Moles spend almost the entirety of their lives underground. We discover them when we trip over one of the mole tunnels or holes that show up in our perennial beds or lawns. Stepping into a mole tunnel can twist an ankle pretty quick.

Mole hills: Evidence of moles in the landscape. 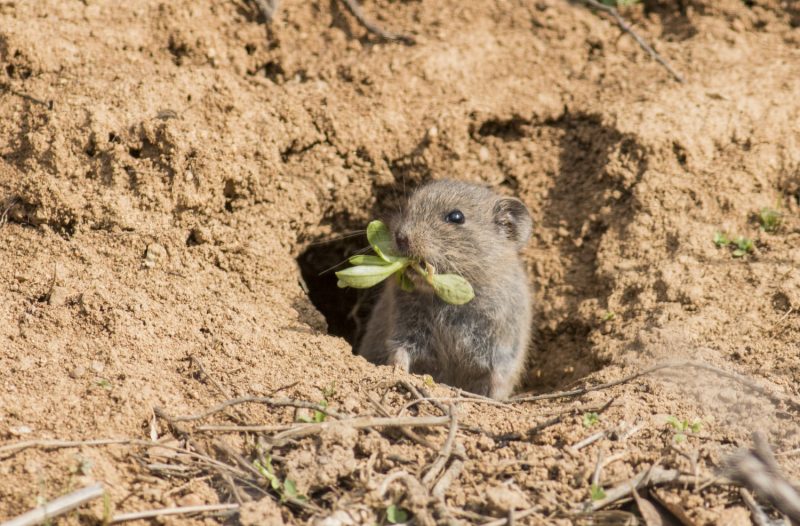 Voles are rodents in the same family as mice and rats. They are prolific breeders, producing four to six litters a year with two to five voles per litter. Their life span is two years. They measure 3”-4” and can live above ground or below ground. They’re called meadow mice, pine mice, and field mice. They eat grasses, roots and tubers, and fruits, seeds, and bark. They spend most of their time in tunnels foraging and sometimes in tunnels left by the moles. They prefer the underbrush of shrubbery and tall grasses to avoid predators.

Voles look very much like mice that love to eat your garden treasures.

Voles live in underground burrows identified by a small hole, generally at the base of a tree or in a lawn, but they won’t have the pile of dirt next to it as mole holes do. They also produce runways in the lawn or flower beds that are a few inches wide. But mostly, you’ll know you have them by the damage done to your plants. When a tree or shrubs start dying, and there appears to be no reason why pulling up the plant and examining the roots almost always shows vole damage. Often there is no root structure left.

Voles eat all year but luckily are considered cyclical, reaching peak population in three to six years and then leveling off to lower numbers.

You may have heard it all when it comes to repelling moles and voles. The solutions range from chewed chewing gum placed in the molehill to used kitty litter placed in random spots inside tunnels. And just FYI, if you were thinking mothballs, don’t. Using mothballs is illegal and can harm people, pets, and the environment. Check out the information here from the National Pesticide Information Center.

An Ounce of Prevention

Start with good gardening practices. Don’t create habitat for moles and voles—they are prey animals and require coverage. Layering on too much mulch, leaving piles of leaves and weeds lying around, or mowing sporadically creates a perfect habitat. Shredding leaves and using them as mulch is great for our gardens (read here for more on that), but allowing them to collect, not so much. Mulching is useful in the garden, but no more than 2”-3” and not right against the base of trees or shrubs. For the best way to mulch, read here. Keep weeds at bay with consistent weeding practices and dispose of weeds immediately after weeding (guilty!). But remember, not all weeds are bad. Read here for more information on that. When mowing, set your blade so that grass will be 3”-4” high; shorter grass gives less hiding space.

Don’t rid the garden of snakes. Yes, get the poisonous ones far from the house and garden, but non-poisonous snakes can help the garden. Many eat rodents, and some eat slugs and other pests. Keep a healthy community of garden wildlife.

Don’t wait for the moles and voles to take over. The minute you see evidence of them, start applying the repellent. 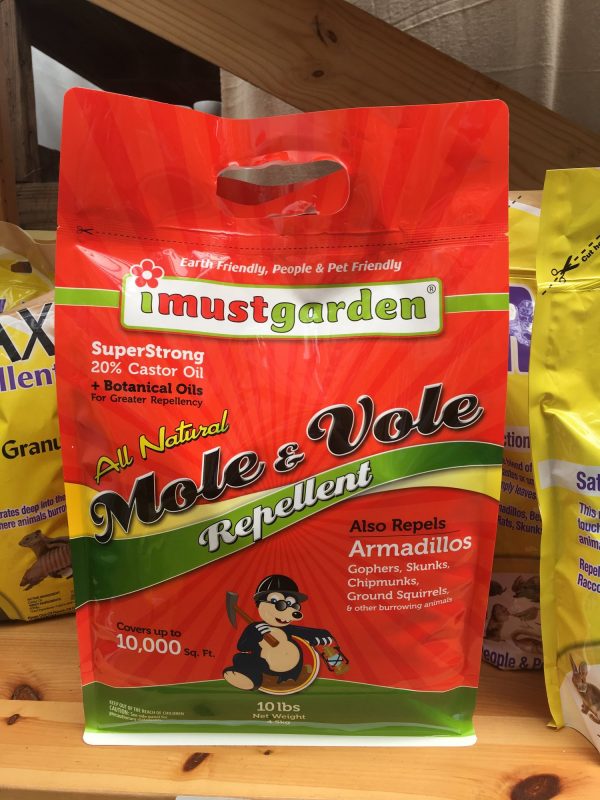 Traps or Mole and Vole Repellents

There are different styles of traps for catching and killing moles and voles. The store sells them, and they are highly effective. But if you’re squeamish, try mole and vole repellent. We sell several brands including Mole Max, and I MUST GARDEN. Mole Max and I MUST GARDEN contain castor oil as the active ingredient. I MUST GARDEN is 20% castor oil blended with peppermint oil and cedar oil and 80% water. Mole Max uses 10% castor oil with 90% of Fuller’s Earth and water. Both are safe to use around pets, children and the environment. Both come in a liquid or granular application and following the instructions on the bag is easy and effective.

Repellents coat the food of moles and voles with an unpleasant smell causing the rodents to relocate. It is applied every 45-75 days depending on rainfall, and with consistency, it gets the job done.